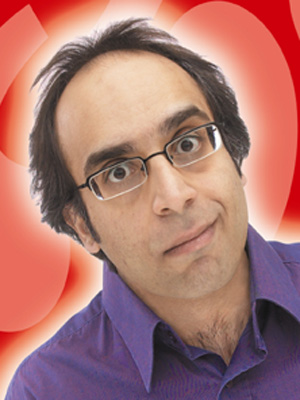 “A thorough delight from start to finish…” Time Out

Inder Manocha has established himself as one of the hottest new talents on the international comedy circuit today. Drawing on his Asian, international relations and therapist background, he delights audiences with his mix of cross-cultural satire, current affairs and nonsense. Last year he was seen in a television adaptation of Meera Syal's book - 'Life Isn't All Ha Ha Hee Hee' on BBC 1, where he played the role of Prem. Later he appeared in 'Waking The Dead' – also for BBC 1. He recently finished filming the feature film “The Blue Tower” for Monkey in Heaven films.

In 2004 Inder's achievements were acknowledged when he won the EMMA (Ethnic, Multicultural, Media, Award) in the category best Comedy/Comedian.

In the same year he appeared at the HaHa Comedy Festival, South Africa. Following his success, he was asked to return later in the year as part of India’s Kings of Comedy in Durban, South Africa.

At the Edinburgh Festival 2003, Inder was invited to perform, twice, at the Assembly Rooms’ prestigious Best of the Fest Show. This invitation was then extended to the whole run of the first ever Best of the Fest in London, at the Bloomsbury Theatre in September 2003.

“Among this year’s highlights at Best of the Fest…was a hugely successful set from a previously unknown comic, Inder Manocha, who went down a storm in front of the 600-strong crowd” The Scotsman

In February 2004, Inder made his successful debut with the prestigious Cutting Edge line up at The Comedy Store - improvised comedy on topical issues. Inder has been invited back regularly ever since. Inder has been a regular on the Sandi Toksvig show (LBC) and recently appeared on Beyond Belief (Radio 4).

Inder studied at Oxford University and worked in international relations and as a therapist before later deciding to pursue a lifelong interest in comedy and acting. In 2001, he began his stand-up career with great success by reaching the finals of So You Think You're Funny? and Hackney Empire New Comedy Acts of the Year, from which he was invited to appear in a full Edinburgh run in The Best of the Hackney New Acts of the Year showcase at the Gilded Balloon.

In 2010 Inder will be taking his first solo hour-long show to the Pleasance Courtyard, Edinburgh, and will be exploring multi-culturalism in 21st century Britain, from the personal standpoint of growing up with the dual identity of 'British-Asian' in the '70s and '80s.

Feature Films
The Blue Tower for Monkey in Heaven films

Reviews
“…this was the highlight of my Edinburgh festival… Inder’s slick, confident and unbelievably smooth style was great to watch… clever, informed and hilarious... Pure Class.” www.Funny.co.uk

“This is a chance to see a wealth of new British talent, all in the same night. …Inder Manocha has no fear in tackling issues from the war in Iraq, to the secrets behind cornershops in Britain…Bright Sparks are shining stars.” - Bright Sparks, Edinburgh Fringe 2003 4-stars Three Weeks

"The exceptional Inder Manocha delivers his dynamic and damning interpretation of contemporary issues….has the priceless ability to make an audience laugh at the thorny issue of race and provides a refreshing tonic in the current climate." - Lewes Argus

“At last, an Anglo-Asian stand-up not afraid to wrestle with the big questions. Like, why is there no one on the Starship Enterprise called Patel?” - William Cook, Guardian Guide – Critics Choice January 2005